Eddie Van Halen in Jump,Â  a music video taken by youtube and two reviews on his album titled The best of both words.Van Halen is probably by far the best band ever to hit earth. I even think the exact same way for Eddie Van Halen alone. He is just so creative with the electric guitar. If you are a huge Van Halen fan, even if you just like the Van Halen-Roth saga or the Van Halen-Hagar saga, or even both, this is the album to get. 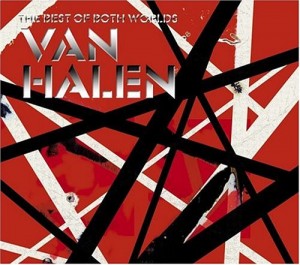 You cant make a better greatest hits album than this. It has every single one of their hits. Even with how the front and back cover of this album is really cool looking and creative. This is the album to get if you are a huge Van Halen fan. It is worth every penny. Van Halen is one of the Greatest Hard Rock, Heavy Metal, and Classic Rock bands of all time. If you do not like them than you are a crazy non-rocker.

If you get this album I know you will start listening to “Panama” and start banging your head. And I know you will take out an air guitar when you hear Eddie Van Halen’s finger-tapping solos in the song “Eruption”. In conclusion this album includes the top Van Halen hits considering it is their Greatest Hit album.