The Wall is one of the best masterpiece album by the Pink Floyd, the great English rock band: the album was produced in a period in which Roger Waters was the band leader. Here are the youtube music video of The Wall and some great enthusiastic reviews about the album.

The Wall details the steady mental breakdown of rock-star Pink, who goes into a self-imposed isolation from society. The songs tell of the steps and repercussions of the building of his “Wall”. The music is very lyric driven, and so whatever particular part of the story is being told in the song is often related through the music.
Naturally, there are some fillers on a 26-song album, but that is often only in the musical sense, as they all drive towards the same central theme and plot. 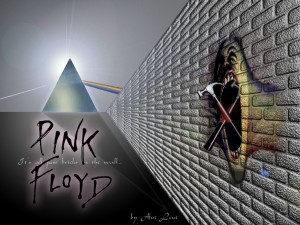 Now, to the sound of the album itself; The Wall features textured and lyrical guitar lines, heart-felt vocals, and rich sound effects throughout. Ranging from the catchy, energetic hooks of “Another Brick in the Wall Part 2” to the soft, emotional introspections of “Nobody Home”.
There’s plenty here to cherish, even with the occasional lukewarm songs and few downright mediocre ones. When in doubt, listen to “Comfortably Numb” and “Mother” to reinstate the magic of The Wall in your mind.

Here is the youtube music video of The Wall by the Pink Floyd.