Youtube music video of The twilight saga soundtrack : Eclipse, and reviews of some fans.
Though I still believe that the Twilight has remained in the number one position, (I mean I listened to that soundtrack non-stop for at least a month without getting tired of it), Eclipse has now come into the #2 spot. I was letdown by the New Moon song choices, some were pretty good but that was nothing compared to this new Eclipse soundtrack. Therefore, the Twilight Saga soundtracks have redeemed themselves with this one. 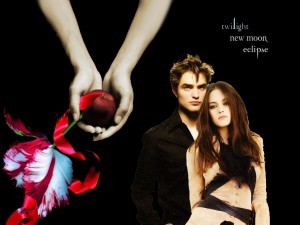 I believe that has largely to do with David Slade who I thoroughly admire for his directing skills and his humility towards pleasing the fans and faithfully representing the book. Well, it seems he also has a great taste in music. I have a strong feeling this film will be the best yet as well. Back to the music, with groups such as Florence plus the Machine which I recently discovered before the soundtrack arrived (Cosmic Love is an awesome song), Metric (Love Stadim Love), Muse (Who doesn’t love Muse?), you can! go wrong.

And the sneak peek of the score from Howard Shore that Jacob’s Theme gives is exciting. I cant wait to hear more. It should be beautiful. This soundtrack is phenomenal. A must have. Trust me on that.

This soundtrack kicks. Yet again, the producers have put together an amazing group of artists to form an incredible soundtrack. Some of my favorite artist appear, including Muse, Sia, and Band of Horses, who all most certainly deliver, as well as every other artist on the album.

Sia’s My Love is quite possibly the most beautiful, heartfelt song I have ever heard, and Metric’s Eclipse (I’m All Yours) is one of my favs as well, especially the acoustic version. But seriously, every song is awesomeness! A definite must, even if you’re not a Twilight fan, this music rocks!