I’m probably one of the few Beatles fanatics to place Let It Be among my three favorite albums, and I dont care! Yes, Phil Spectoris no George Martin (really, who is?). Martin was the actual producer at the sessions for Let It Be, though, and he clearly had more than a hand in crafting its sound. It’s a messy album, to be sure, but that ramshackle quality really adds to its charm. “IVe Got A Feeling” and “Two Of Us” are among my all-time favorite Beatles songs. There’s the title track and a truncated version of “Get Back’. “Dig A Pony”, 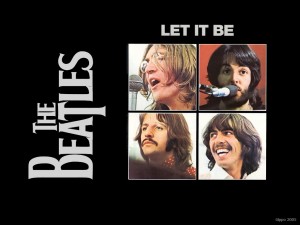 Here’s where I fall off The Beatles bandwagon, though. I realize that “Across The Universe” is a popular, beloved song and will probably end up as one of the best-selling Beatles tracks here.

I just cant get into it that much, to be honest. I appreciate its artistic merits, but not my favorite.
That said, buy the record. It’s The Beatles-as-bar band; a awesome classic.