One of the best 2013 music video on Youtube is La La La by Naughty Boy Featuring Sam Smith. Music is awesome and Lyrics is based on an old Bolivian Legend. 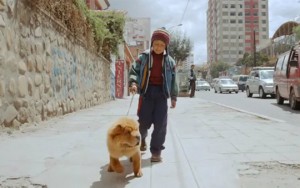 According to Ian Pons Jewell, Â the music video, which hints at The Wizard of Oz, is about an “aural” Bolivian legend dating to the early 20th century, which concerns a deaf boy who fled from his abusive home and found a stray dog that accompanied him since then. After living on the streets for an undefined amount of time. he discovers that he has special talent of perceiving people’s troubles, which he can heal by screaming, which is said to be as loud as an earthquake and a tornado. One day, he finds an old man who is being stoned by villagers while being taunted and ridiculed.

By screaming, the boy resolves the situation and revives the old man’s heart (in the video, by buying him a new heart). Together, they meet a disfigured man who was abused, considered a leper by society. The disfigured man reveals that he is a prophet who was cursed by a demon (El Tio) because he didn’t worship him anymore, and abandoned the society where the demon resided.

The Meaning of La la la by Naughty Â Boy

El Tio is considered as the lord of the underworld, to whom mortal people offer gifts in exchange for protection, or to ease his anger. The prophet said anybody who could hear the demon would fall under his control. He told them the demon could be found in desert, where there once was a town in which people worshipped the demon and he cursed them to kill themselves. Together they go to the place where the demon should reside.

They arrive at a mine where the demon is supposed to be, but everybody with their hearing intact could be cursed by the demon, thus the boy had to face the demon alone and over voice him with his scream to stop him from cursing others.
The video ends with an open end, considering that El Tio is the lord of the underworld who rules in the mines, which were of use for people for a prolonged period of time, whom miners sacrifice a llama from time to time to avoid from being cursed, the boy could be seen as a big sacrifice to redeem the miners from El Tio’s undesirable influence.