So What by Miles Davis : video

A real masterpiece! Miles Davis improvises his solo in So What. Miles Davis, John Coltrane and Wes Montgomery.Â  You cannot sit and look cool in a jazz club without ever hearing these artists. 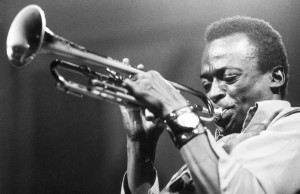 So What Miles davis

Miles Davis Kind of Blue : So what video

This song is taken by the best jazz album of ever: Kind of Blue. It is a bit miracle of recorded music, recognized by fans of all sort of music as THE album and So What is the best tracks of this album. This is the music to play for the aliens who are holding humanity at gunpoint as proof that we matter and we are capable of something beautiful and magical. Listening to this album once in a while is a great antidote to the rampant commercialism of today’s music scene. It’s a little bit of sacred space.

This video was recorded in New York on April 2 1959. Bill Evans, the original piano player on the recording, was absent and Wynton Kelly substituted him at piano. Moreover, Jimmy Cobb was on drums and a great John Coltrane played the tenor saxophone.