Michael Jackson Hold my Hand sung with Akon.
It’s really funny to me how they think they can get away with the phony songs on here. I can obviously tell it’s not Michael Jackson. Now for the songs that are Michael Jackson’s; there’s a reason why he had them locked away/put to the side. 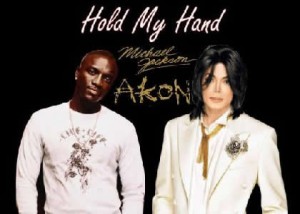 He felt he had not perfected them, needed to work on them more, or just did not like them. Either way you do not touch the dead man’s music.
Here is Hold my hand video by Michael Jackson.

If I bought this album, I’d feel like I need to wash my hands: it just does not feel right. If they think that releasing his unreleased/unfinished music is at real for his fans, it’s not. I feel disgusted. By the way much Too Soon is a beautiful song.