Misery is the first single off the album Hands All Over, and it is an infectious, poppy song with melodies that are familiar to Maroon 5. A lot of people are complaining that it is not like their first album, but that’s what bands are supposed to do. They change and adept to current markets, and if they kept doing the same thing people would complain about them not having anything new. 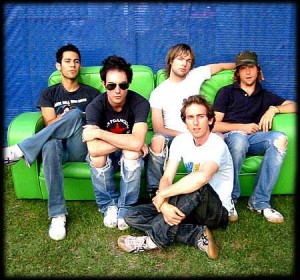 If you’re mad that the band is becoming too ‘commercial’ or ‘selling out’, what do you expect? They make music for a living, it’s their income. If you are the only person who knows about them, how are they supposed to survive off just you buying their album? It’s a business. Anyway, the song is good, a nice summer listen. Buy it, and buy their album September 21st.

One part rockin’ one part funky! Woo! Maroon 5 is back! So great to hear seriously funky stuff from live musicians than the canned techno beats and synth loops that infect most pop. The synth is live and lively, the bass is solid and deep, the drums are real and groovin with a natural flow’, the guitar is clean and tight, and Adam’s vocals keep getting better. One the 2000’s best bands are at it again!

I’m so ecstatic that Maroon 5 is finally releasing their new album! They never seem to disappoint when it comes to making music.

Their lyrics are seductive and addicting that you have to listen to it over and over.i love this song. It has a good feel to it. really catchy I cannot wait to hear the rest. The CD releases 09/21/2010! “Hands All Over” mark your calendars! I love Maroon 5 and cannot wait to see them on tour!