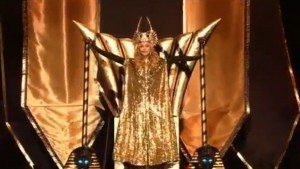 Here is the wonderful and choreographic youtube music video by Madonna at the NFL Super Bowl 2012. Nicki Minaj,Â  Mia and LMFAO are other pop stars of this great event.

So I’m Breathless is technically not a studio album, but a soundtrack. Therefore it’s never included when critics tally the number of albums under Madonna’s belt. This has always bothered me. If a soundtrack consists of only one artist performing every track, like Prince’s soundtrack to Burton’s Batman, or Eurythmics soundtrack to to the film 1984, why can! it be both a “soundtrack” and a “studio album”? I mean, these are all new recordings right? All done in a studio, right? And most the songs on Breathless fall into the “inspired” category rather than actually being featured in the film. But I stray from my point. Its a wonderful album. I suppose it could be called a ‘period piece’ considering 11 out of 12 tracks are heavily influenced by music of the 30’s and 40’s.The album did not get the best reviews at the time, several critics sited Madonna’s voice being too weak fort he genre she was tackling, but I wholeheartedly disagree. I think her voice is actually very well suited for it. Sooner or Later wasn’t much of anything until her performance at the Oscars- one of her most memorable (remember her date that night?) And we can! forget Vogue. One of her best songs of all time. One of the best dance tracks of all time. That song alone is worth the price tag. But you get so much more. The beautiful lament that is “Something to Remember as well as the cheeky “Hanky Panky” (The only other song on the album to see commercial release as a single.)

My personal favorites are “He’s A Man” (Driving at night to this song makes you feel like a gangster) and “Back in Business” (A song I would have loved to see her perform in her one of her Dick Tracy costumes). There are some weak tracks here too, particularly the goofy “Cry baby” and the irritating “I’m going Banana’s.” But in general this album was solid.