LMFAO I’m In Your City Trick

A friend of mine who is pretty musically inclined absolutely hates this band; being the friend I am I was gonna buy it for him. That was until I saw the price; the fool? “you only buy your city lulz”, doesn’t work as an excuse for me, cause even then it’s a hot mess of failure. I understand the point was to reach as many demographics possible, but how many areas mentioned geographically are located near the ocean? Exactly. This was designed as niche music and to create our generations “kid n play”, or “criss cross”.

Someone put this was a farce and intended to be a farce; I doubt. Jon Lannie- brilliant; this thinly veiled hipster rap, trying to be ironic and cool, but fails due to mediocre lyrics, and somewhat decent production. 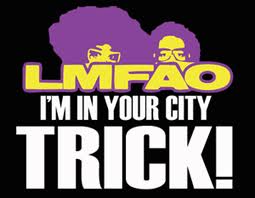 I understand the concept: get a custom song for your city. Where is the talent in that? Where is the point? I’m not shelling out any money for a damn song that everyone else has, but with one word changed. Doesn’t that defeat the purpose? The song isn’t unique for your city; it is the SAME SONG!

And what do you do if your city isn’t listed? Get the next closest one? If your city was worth singing about, someone would’ve done it already, not rehashed the same crap with one word changed. Spend your money on something that will actually make you feel unique, because if everyone has one of these song, no one is special.