A well known jazz masterpiece is the album A love Supreme by John Coltrane in a youtube video. Here are some reviews about it.
Let’s be honest, the only words “sung” in the entire album is the title of the album. I am a newcomer to jazz and this is my first jazz album. To be honest, I was quite impressed, coming from a person who listens to mostly alternative rock. John Coltrane is a clever band leader, giving the album it’s own groove. 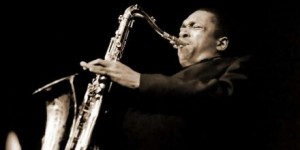 By peeking into the liner notes, you’ll notice that the album was based on Coltrane’s life-changing religious experience he had in 1957. As being slightly agnostic yet born into a Christian family, I’d like to thank god for inspiring Mr. Coltrane making this wonderful masterpiece.

The album is short, clocking at 32 minutes, but it’s perfect that way. The album goes fast with these 7-minute parts, and that’s a good thing.
If you want an album to chill to, without being too easy or too hard to listen to, pick this one up. Even if you’re not a jazz fan (like me), it’s generally accessible for eating, relaxing, or just listening to it. It sure wins my vote for the best album of 1964.