Diana Krall is among the most gifted artists of our time, and we are fortunate that she continues to breathe new life into a genre that might otherwise go unrecognized by younger generations. They will ultimately decide whether or not it deserves to be preserved, and whether or not they should encourage its propagation in perpetuity. Diana Krall, and the many legendary musicians she has recorded with, has consistently proven herself to be a discerning arbiter of exquisite taste and style who possesses extraordinary technical mastery of her art form. 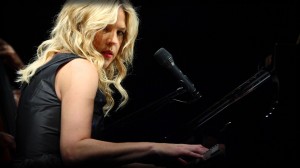 Having said that, I found this album disappointing. While technically competent, I found the arrangement of ‘Too Marvelous for Words’ to lack the excitement and spirit of the original-something that Diana could have easily nailed. And while ‘For no one’ is beautifully reproduced, it only reminds me of how great the Beatles version was. In cases like this I always wonder why musical artists can’t just leave well enough alone; the original version is almost always much better. What’s the point of demonstrating that they can reproduce it with remarkable accuracy; who cares? As David Byrne once sang: ‘say it once, why say it again?”

This effort simply lacks the energy and originality that Ms. Krall built her reputation on. The mood of the recording is somber and the track sequence is monotonous; much like Andre Previn’s densely orchestrated cocktail lounge recordings of the late 50’s and early 60s, only with vocals. The cover art, to its credit, is remarkably reflective of that era. To give her the benefit of the doubt, and I always will, quality recordings require the talents of several stake holders in order to be hugely successful. In this case, it sounds as though the producer, and Ms. Krall, were largely indifferent as to the overall character and value of its content. I would have named it Sleepy Nights